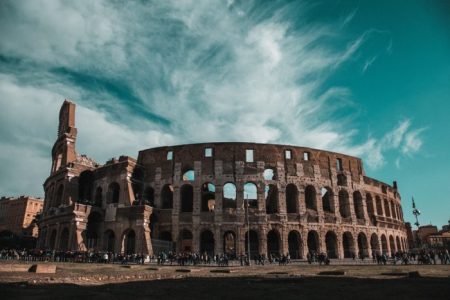 Planning a trip to Rome, and wondering what are the best places to visit in Rome?

Rome is the capital city of Italy. It once was a very powerful city — a centre of the Roman Empire and later the Christian World. In Rome, you are surrounded by the past everywhere you go. Being rich with history and cultural heritage, Rome is one of the best places to visit in Italy.

Rome is best known for its ancient buildings. Rome’s oldest neighbourhood, Ancient Rome, is where all the ancient buildings are located. The area is listed by UNESCO as a World Heritage Site. But it’s not the only amazing place to visit in Rome. There are plenty of others.

Here are some of our favourite places to visit in Rome.

8 Best Places to Visit in Rome

The Colosseum is an iconic oval amphitheatre located in the heart of Rome.

It is undoubtedly one of the best places to visit in Rome. The Colosseum is the largest ancient amphitheatre ever built. Despite its age (it was founded almost 2000 years ago!), it is still the largest standing amphitheatre in the world.

There’s no question about it — the Colosseum is a must-visit for everyone travelling to Rome! You can admire the mighty structure from the outside, or book a ticket to explore it from the inside. Arrive in the morning to beat the crowds (and the heat!). 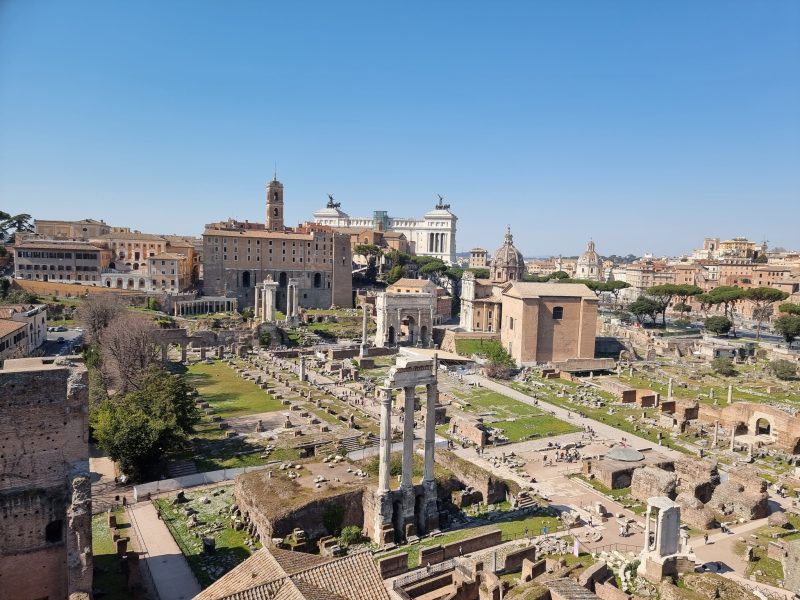 The Roman Forum is a plaza with ruins of ancient government buildings.

Located just west of the Colosseum, it’s one of the top attractions in Rome.

Both the Colosseum and the Roman Forum are among the first places tourists visit when they come to Rome. These are quintessential Rome landmarks everyone must visit. And they are hard to miss, really, since they’re located in the heart of the city.

The Roman Forum was a commercial and political centre of the Roman Empire. It had public spaces, basilicas and temples, and was the centre of day-to-day life in Rome. The Roman Forum is considered ‘the most celebrated meeting place in the world’. There’s no doubt it should be on your Rome must-visit list. 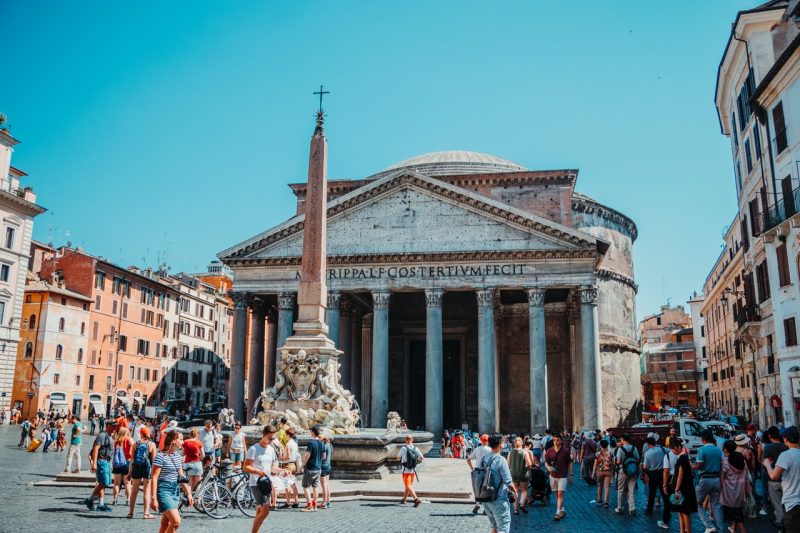 The majestic Pantheon is one of the oldest buildings still in use today.

Built nearly 2000 years ago, the Pantheon features an impressive facade and colossal dome which, in fact, is the world’s largest unreinforced concrete dome.

The Pantheon is one of the best-preserved buildings of Roman times. Since the 7th century, the Pantheon has been a church, and it continues to function as a church to this day. 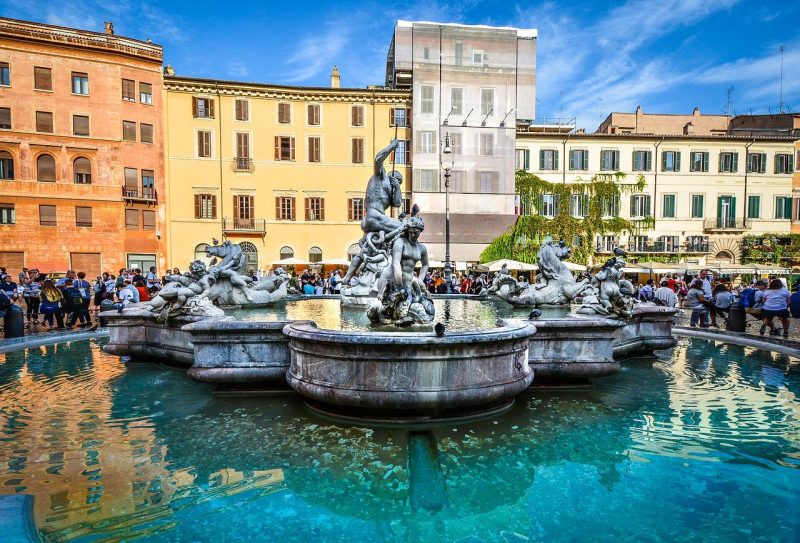 The Piazza Navona is one of the most famous squares in Rome.

It’s a lively square with many restaurants and cafes. The square’s main features are its fountains and the copy of an Egyptian obelisk. At the base of the obelisk, sits the famous La Fontana Dei Quattro Fiumi fountain.

Around the Piazza, you can see great examples of Baroque Roman architecture.

The Piazza Navona is one of the most picturesque places in Rome. 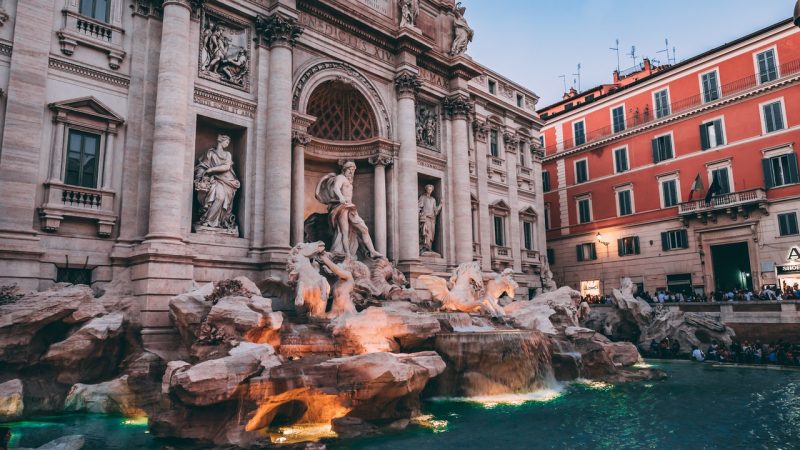 Trevi Fountain is perhaps the most famous fountain in the world.

Built more than 200 years ago, Trevi Fountain still stands proud in the heart of Rome. Being 26 m high and nearly 50 m wide, the fountain is the largest Baroque fountain in Rome. The fountain has appeared in several films, including the classic Roman Holiday (1953) featuring Audrey Hepburn and Gregory Peck.

As the fountain is one of the best places to visit in Rome, many tourists flock to see it. Arrive early in the morning to beat the crowds. This stands true for many other popular landmarks of the city. 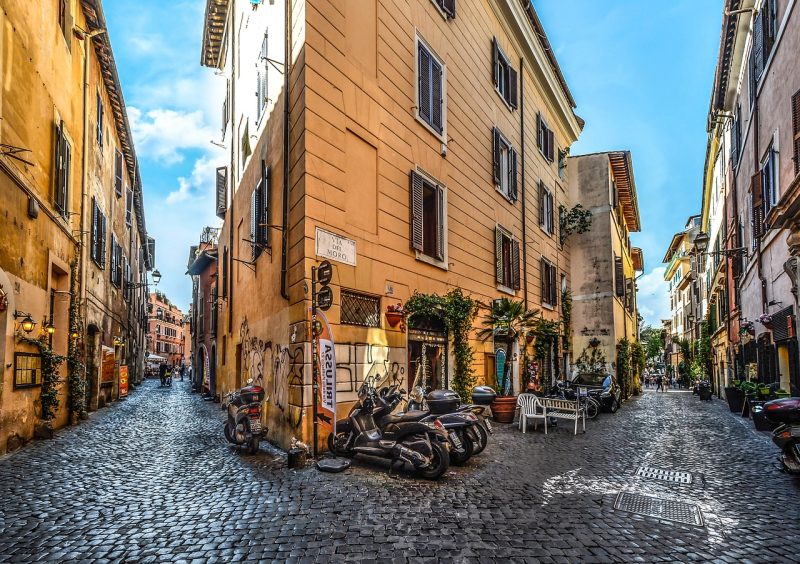 Trastevere is a colourful bohemian neighbourhood in Rome.

In our opinion, it is one of the prettiest neighbourhoods in the city. It is known for its peaceful and bohemian vibe which is loved by tourists from all over the world. The neighbourhood has its roots in the Middle Ages, and once it used to be a working-class neighbourhood.

The charming Trastevere is filled with artisan shops, pubs, outdoor bars, cafes and restaurants (from traditional trattorias to upscale eateries), as well as B&Bs and budget hotels. It’s one of the best places to visit in Rome for a leisurely stroll in the evening. 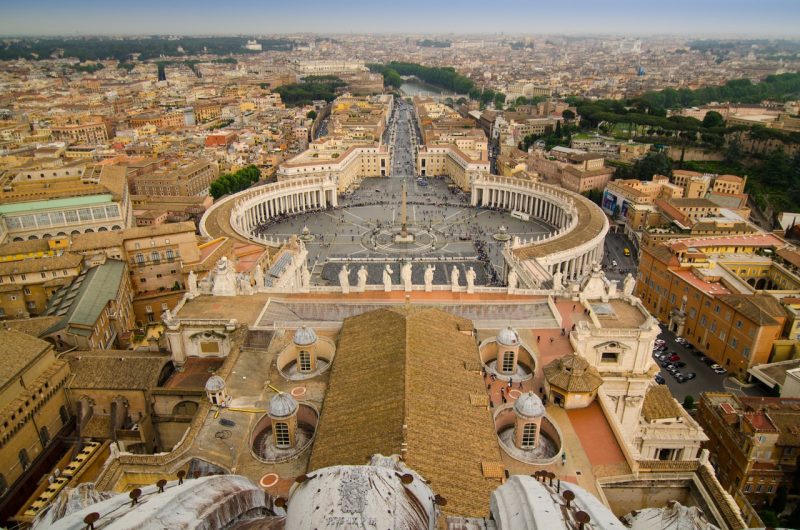 Rome has been an important centre of religion and pilgrimage for centuries.

The Vatican, the world’s smallest sovereign state, is the headquarters of the Roman Catholic Church, and the seat of the pope. Visiting the Vatican is one of the best things to do in Rome. Do not miss Vatican Museum and Sistine Chapel, which are any Rome trip must-sees.

The Vatican Museum houses a large collection of art gathered by the Catholic Church and some of the most important Roman sculptures and masterpieces of Renaissance art.

The Sistine Chapel is the official residence of the pope. It is famous for its architecture and frescoes of biblical subjects. The iconic Michelangelo’s fresco The Creation of Adam covers the altar wall. The chapel also features wall paintings by several other leading Renaissance painters. 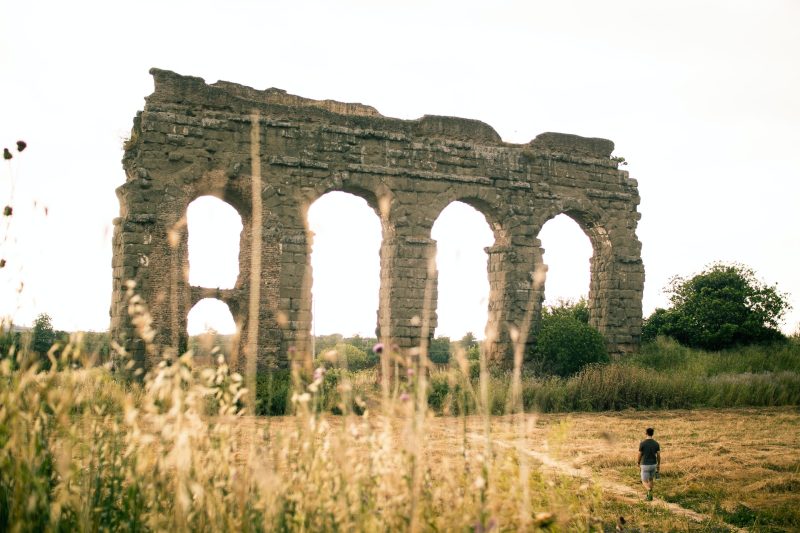 Catacombs and Roman Aqueducts are lesser-known attractions in Rome.

Scary underground rooms (crypts) decorated with human bones. Unusual underground cemeteries and temples. Mysterious passageways… This is not for everyone! But if it might be interesting to you, book a guided tour of Roman Catacombs to learn more about these unusual places in Rome. Besides the catacombs, you’ll visit ancient Roman Aqueducts.

Join this tour to see Rome from another perspective. 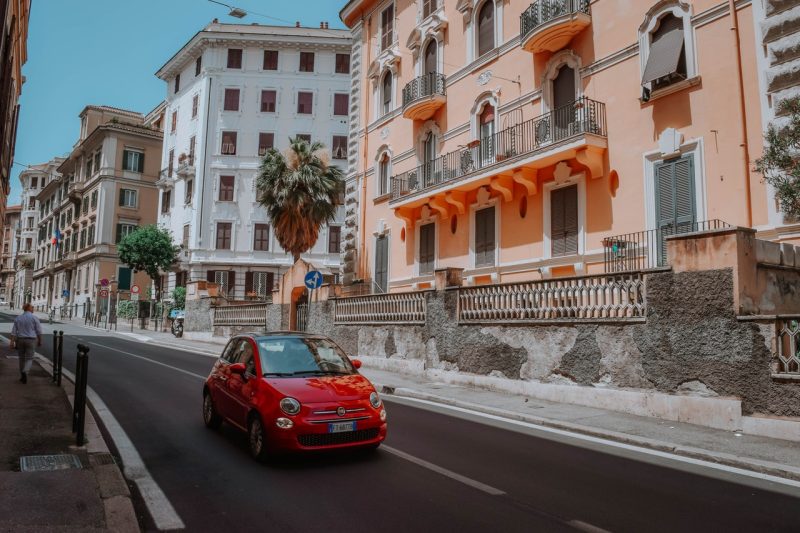