Flights to CALIFORNIA from Scandinavia from €321 both ways!

Santa Ana is the county seat and second most populous city in Orange County, California. Founded in 1869, the city is part of the Greater Los Angeles area, the second largest metropolitan area in the United States with almost 18 million residents in 2010. Santa Ana is a very densely populated city, ranking forth nationally in that regard among cities of over 300,000 residents (trailing only New York City, San Francisko, and Boston). In 2011 Forbes ranked Santa Ana the fourth-safest city of over 250,000 residents in the United States. Santa Ana lends its name to the Santa Ana Freeway, which runs through the city. It also shares its name with the nearby Santa Ana Mountains, and the Santa Ana winds, which have historically fueled seasonal wildfires throughout Southern California.

A lot of options all routes

As the number of tickets for this price is limited, then do not wait long and book now!

To know more about Santa Ana, you can visit and read more in Wikitravel here

To check more details about flights, look at screenshots below: 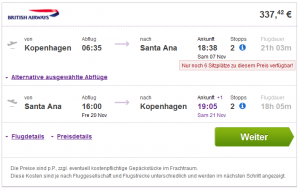 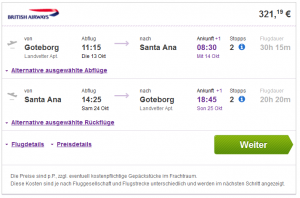 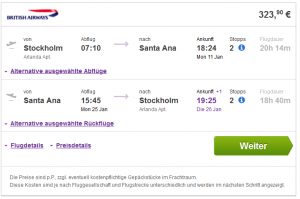 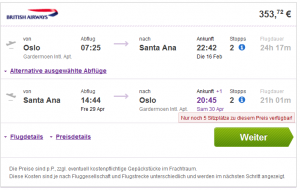 XMAS! Cheap flights from Vilnius to MALTA from €41

Direct flights from Budapest to Sicily from €30

Cheap flights from Tallinn to VENICE from €20 (NYE too)