Flights to TORONTO from Stockholm from €346 both ways!

Toronto is the most populous city in Canada and the provincial capital of Ontario. It is located on the northwestern shore of Lake Ontario. The city is the anchor of the Golden Horseshoe region, which wraps around Lake Ontario from Toronto to Niagara Falls and totals over 8.5 million residents, approximately a quarter of Canada’s entire population. Toronto is the fourth largest city and fifth largest urban agglomeration in North America. Toronto is sometimes referred to as The New York City of Canada because of the general feel of the city is similar to that of New York City, and because Toronto has been a popular destination for immigrants.

To know more about Toronto, you can read more in Wikitravel here 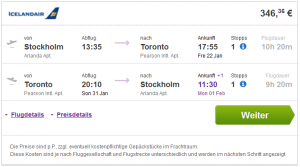 LAST MINUTE! Direct flights from Frankfurt to MALDIVES for €136

Cheap flights from Dublin to BARBADOS from €329 **PRICE DROP**

DIRECT flights from Frankfurt to SEATTLE for €391