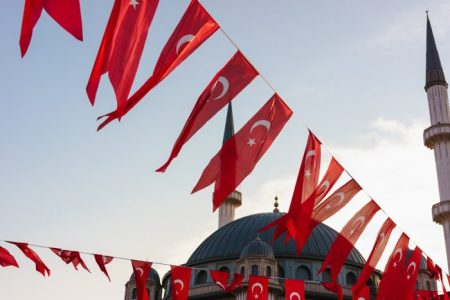 Planning a trip to Istanbul, and wondering what are the best places to visit in Istanbul?

Istanbul is one of the most visited cities in Europe. It’s not surprising that the city is so famous among foreign tourists. A city that is straddling two continents and is rich with culture and history doesn’t deserve less than this!

Istanbul is not only an amazing place for culture lovers, but also for shoppers and culinary enthusiasts.

9 Best Places to Visit in Istanbul 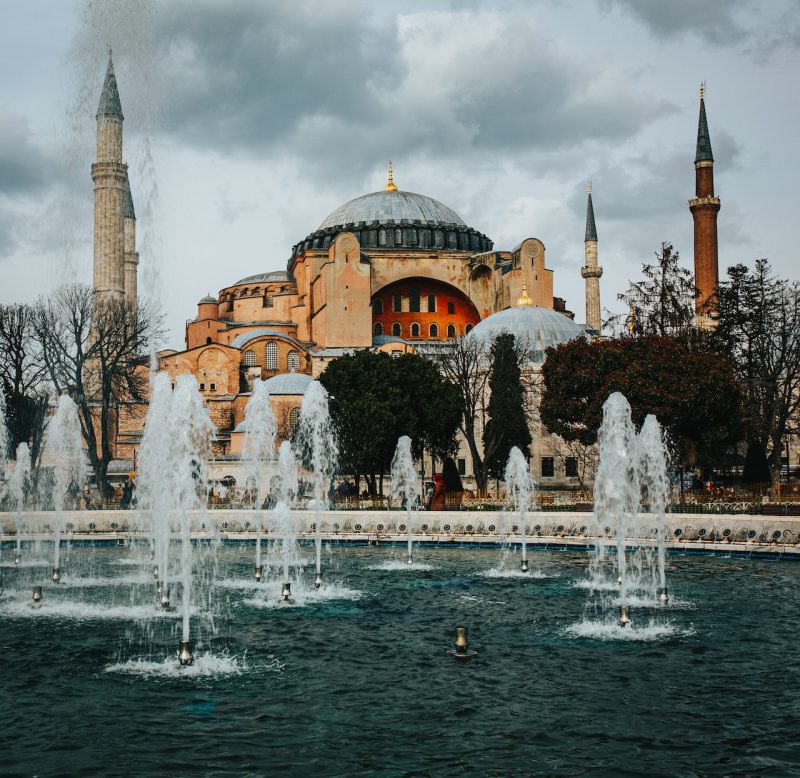 Hagia Sophia is one of the most notable landmarks in Istanbul.

It is a large mosque located in the Sultan Ahmed district, close to other popular attractions including the Blue Mosque and Topkapi Palace. Originally it was built as the Christian cathedral during the Roman Empire more than 1400 years ago! The minarets were added during the Ottoman Empire. 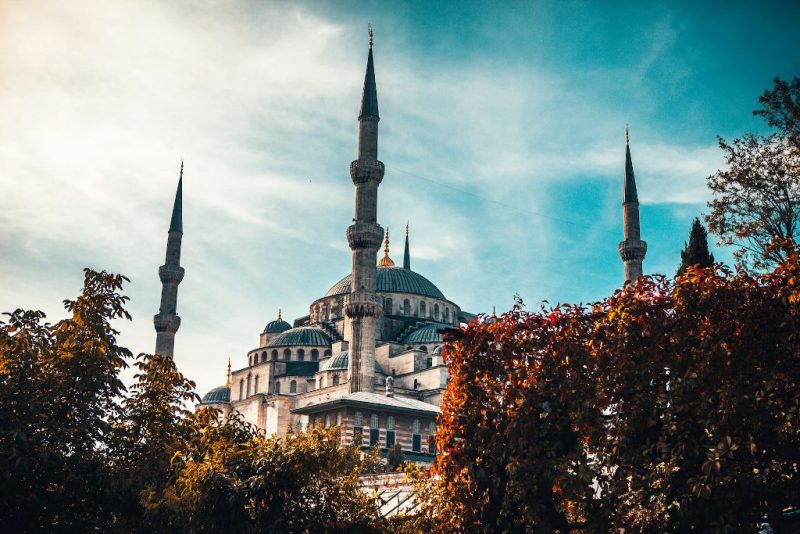 The Blue Mosque (Sultan Ahmed Mosque) is another popular landmark in Istanbul.

Being an Ottoman-era historical mosque, it is one of the most beautiful mosques in the city. Completed in 1616, the mosque features 5 main domes, 8 secondary domes and 6 minarets. The interior of the mosque is adorned with beautiful hand-painted tiles.

Just like Hagia Sophia, the Blue Mosque is a UNESCO World Heritage Site. 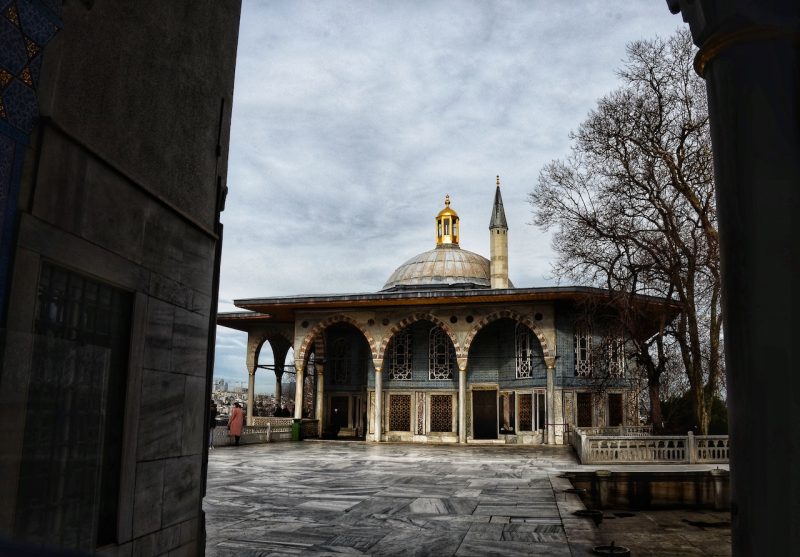 Located near the Blue Mosque and Hagia Sophia, Topkapi Palace is one of the best places to visit in Istanbul. The complex was built in 1465, and in the 15th and 16th centuries, it served as the main residence of the Ottoman sultans. Now it’s a large museum dedicated to the Ottoman Empire and modern Turkey. 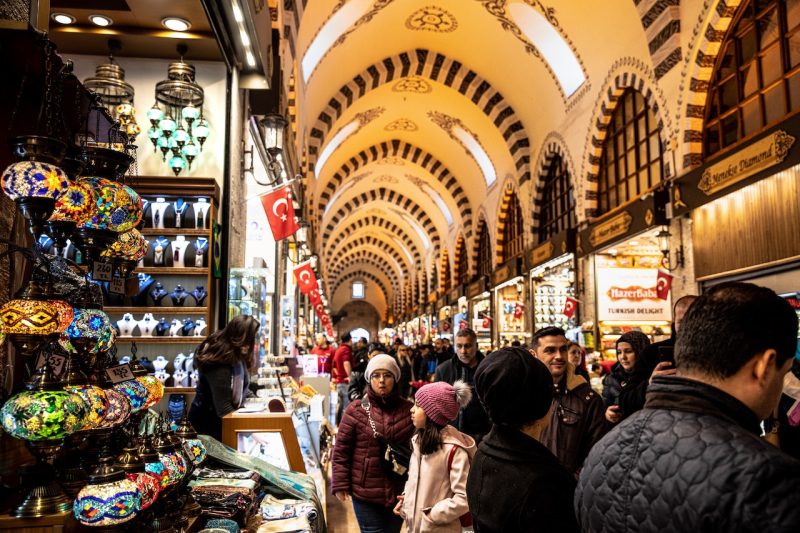 The Grand Bazaar is one of the largest and oldest covered markets in the world.

Dating back to the 15th century, the Grand Bazaar is a very important historical market and landmark. It contains over 50 covered streets and more than 4000 shops. The total area of this market is about 30,000 m2. It is one of the most visited tourist attractions in the world.

Grand Bazaar is one of the best places to visit in Istanbul for those who love shopping and haggling. In Grand Bazaar, these two go hand in hand. In this market, you’ll find everything! And I mean everything! Spices, sweets, jewellery, textiles, carpets, clothes, souvenirs, tableware, handbags, footwear and so much more!

The area around Grand Bazaar is filled with little shops, too. It’s a place where plenty of cheap local Turkish restaurants and cafes are located. 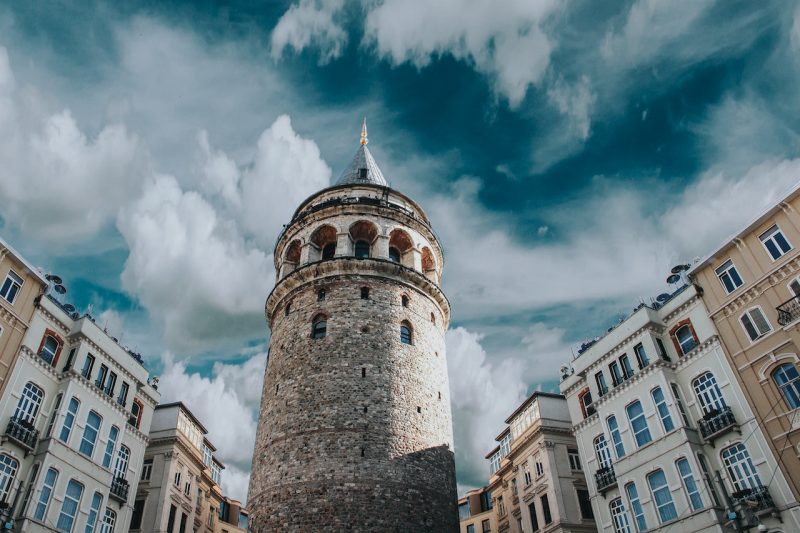 Galata Tower is a 14th-century tower in the Beyoğlu district.

In the 16th century, the tower was used as a prison. Now it’s a museum and features a top-floor restaurant. At the top of the tower, there’s also an observation deck which offers expansive, 360-degree views of the Bosphorus from its balcony.

Galata Tower is named after the quarter in which it’s located (Galata). Galata is one of the oldest neighbourhoods of the city, filled with small shops, chic bars, and old-school restaurants. 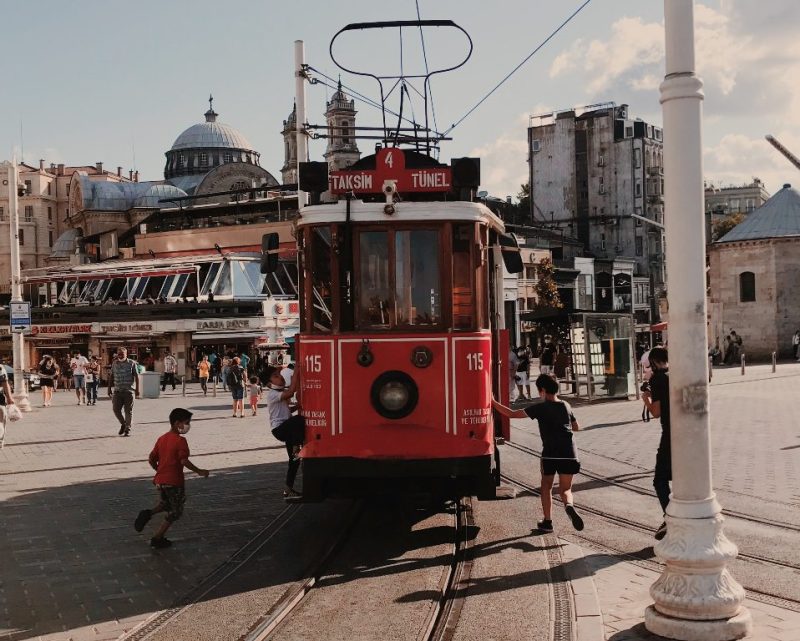 Istiklal Caddesi is a pedestrian street in the heart of Istanbul.

Filled with shops, boutiques and famous brand stores, Istiklal Caddesi is one of the best places to visit in Istanbul, especially if you love shopping for clothes and footwear.

The street is also known for its high-end sweet shops and Turkish ice cream (Dondurma) vendors that make and serve ice cream in a unique way. In the middle of the street, there are tram tracks on which Istanbul’s nostalgic tramway runs. It is one of the remaining historical tram lines in Istanbul (there are plenty of modern ones, though). 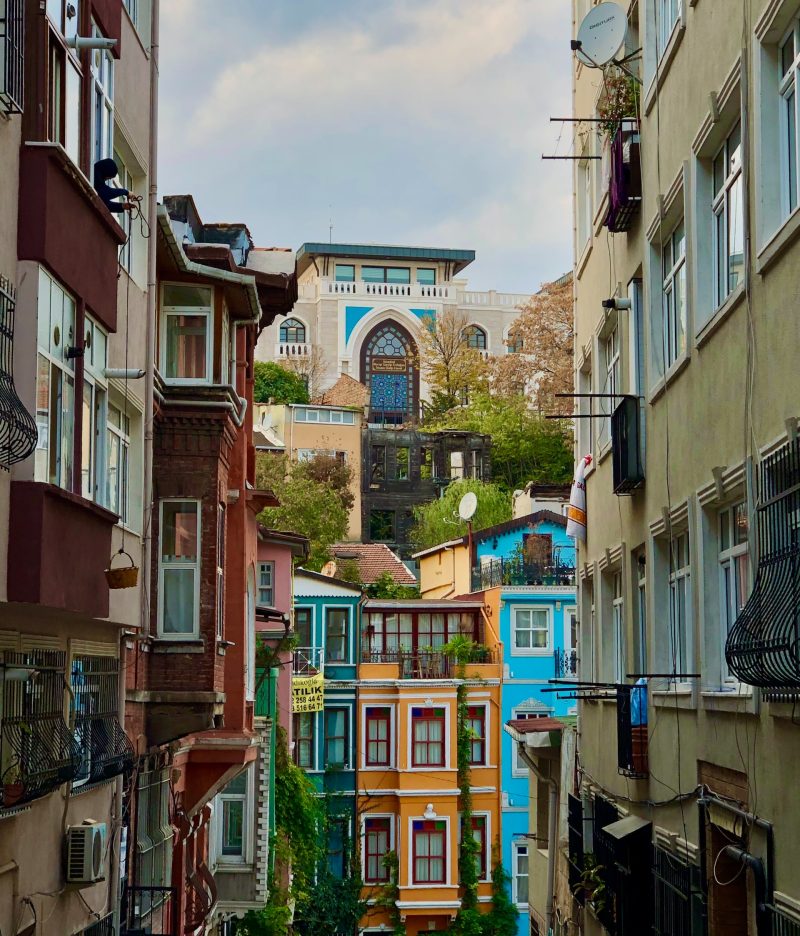 Balat is one of the oldest neighbourhoods in Istanbul.

It is one of the neighbourhoods with the richest history in the city. Once the neighbourhood housed the Jewish community of Istanbul. The neighbourhood’s streets are lined with small, historic stone two and three-storey houses. Balat is very popular with tourists, as it’s so pretty. Many historical houses have been repainted in bright colours and turned into cafes, restaurants and hotels. 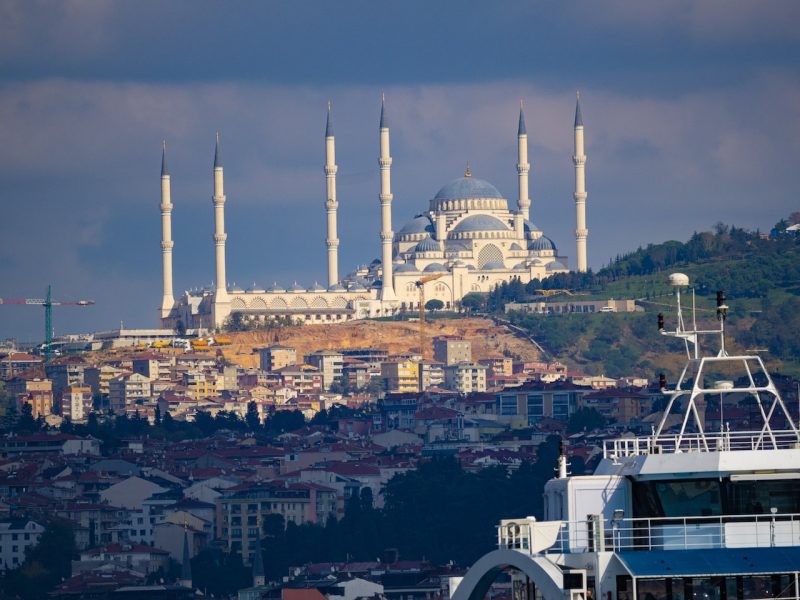 When you are exploring Istanbul, do not miss its Asian side!

As you might already know, Istanbul is divided into two sides — the European and Asian sides. Between the two sides, there’s the Bosphorus strait. Both sides are linked with the Bosphorus Bridge and a number of ferries.

Currently, the largest mosque in Turkey (the Grand Çamlıca Mosque) is located on the Asian side of Istanbul. It is situated on a hill and can be seen from many places in Istanbul, even from the European side.

Also, one of the two historical tram lines (T3 Line — Kadıköy-Moda Nostalgia Tramway) is located on the Asian side of the city.

Moda Coastal Park and Pathway is a nice place for a relaxing walk. 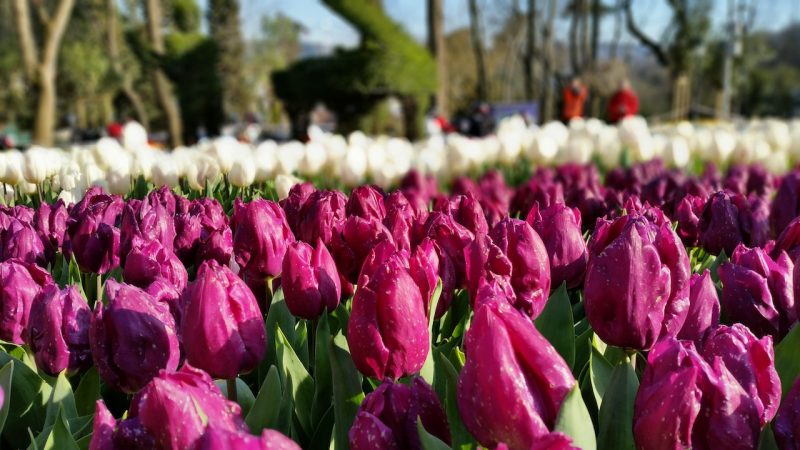 Emirgan Park is one of the largest public parks in Istanbul.

This park is one of the best places to visit in Istanbul during spring when flowers are in full bloom, and the park grounds are covered with flower carpets. Emirgan Park is known for its vast tulip beds. An annual international tulip festival is held in the park every April. 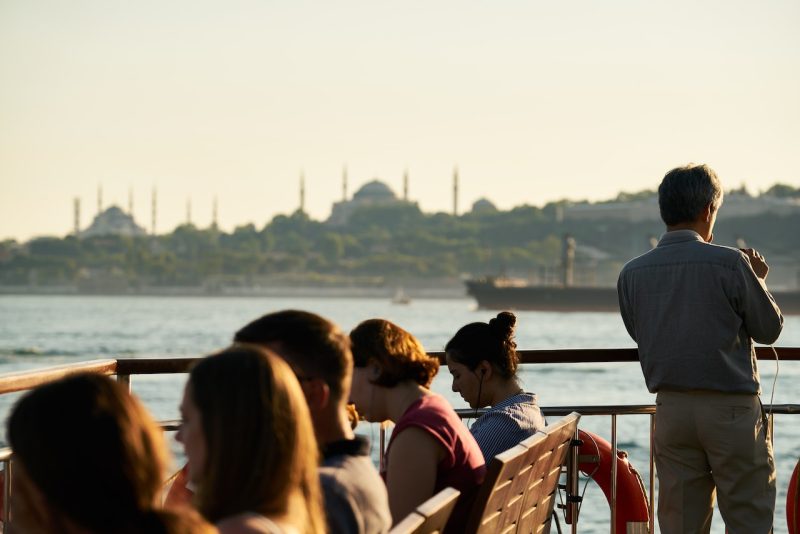