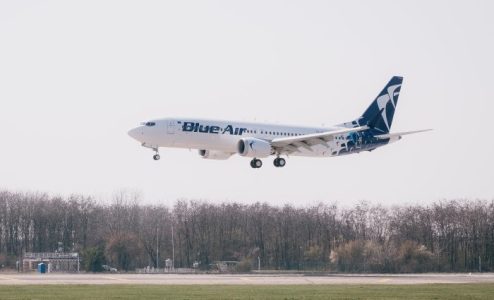 Blue Air suspends all flights from Romanian airports for a week

Blue Air, the biggest privately-owned Romanian airline, will suspend all of its flights that were supposed to take off from Romanian airports until Monday, September 12. The company says it was forced to take this decision after the Environment Ministry blocked all of its bank accounts, according to a press release issued on Tuesday, September 6.

Blue Air said its flights from foreign airports to Romania would take place as scheduled, on September 6. However, as its aircraft will not leave the Romanian airports after that, inbound flights to Romania will also be suspended.

The company says that it can’t pay its operating bills anymore because of the Romanian Environment Ministry’s decision to freeze its accounts. However, it doesn’t mention the factors that have led to this drastic decision from the Romanian authorities.

Blue Air claims that a statement by the head of the Romanian Consumer Protection Agency (ANPC) urging travellers to stop buying Blue Air tickets has led to EUR 5 million worth of lost ticket sales and pressure from its suppliers to pay the bills in advance.

The company also says that the recent events have blocked the talks it had with two investment companies from London that were interested in joining as shareholders.

In July, Romania’s consumer protection authority ANPC Blue-Air EUR 2 mln for cancelling over 11,000 flights over a 12-month period between April 30, 2021, and April 30, 2022. The authority also ruled Blue Air should return to customers within ten days the RON 66.5 mln (EUR 13 mln) collected in fares for the respective flights. The company said it would challenge the sanction.

On September 6, just hours before announcing the suspension of its flights, Blue Air also announced it closed a code-sharing partnership with Air Connect, a small Romanian airline that has only recently started operations. Under the agreement, Blue Air will transfer the operation of selected domestic and international EU regional services to Air Connect.

Cheap flights from Bucharest to SICILY from €29

Cheap direct flights from Romania to CYPRUS from €20