Chaos continues: Gatwick closed again due to a drone flying over

The chaos continues at London Gatwick International Airport. On Friday evening officials spotted a drone flying close to the runway, so had no other option to close the airport once again.

Police have been locked in a game of cat and mouse with the drone, and have received about 50 reports of the device being flown near the airfield since Wednesday evening.

No arrests have been made, and the airport is expected to be closed for the “foreseeable future” while the hunt for the operator continues. Those due to travel on Friday have been urged to check with their airline before arriving at the airport.

Det Ch Supt Tingley said police did not know the make and model of the drone but suspected it had been “adapted and developed” with the intent to cause disruption.

Officers had, however, deduced “certain specifications” such as the device’s size, he said and urged anyone with pictures of the drone to contact police.

After other strategies to bring down the drone failed, Det Ch Supt Tingley said, the force was reconsidering plans to shoot it down.

He said police were also following lines of inquiry, including “particular groups” and a “number of persons of interest”. 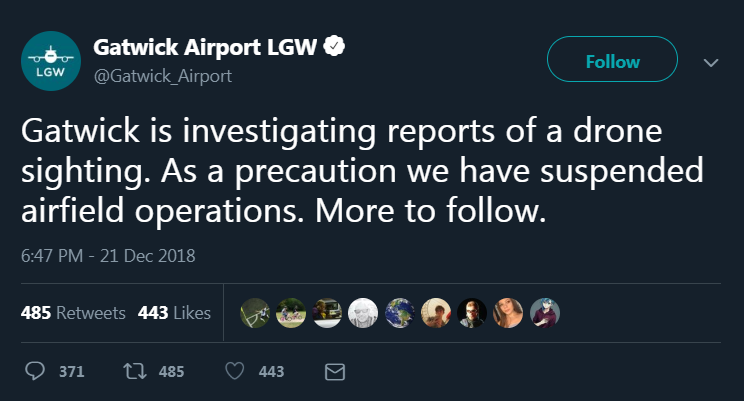 Non stop flights from Amsterdam to Beirut, Lebanon from €125

Direct flights from Marseille to Cyprus for €18

Cheap flights from Sofia, Bulgaria to BARI, Italy for €19

Cheap direct flights from Milan to Hurghada, EGYPT from €74