CANARY ISLANDS is the Top tourism destination in the EU!

The Spanish archipelago Canary Islands, also known as Canaries, just 100 km west of Morocco topped the list being named the most popular tourism destination of 2015. No wonder why – sunny beaches, stunning mountains and hot climate is the perfect reason for visiting this part of the world. 94 million overnight stays ensures the title for the Spanish islands 2nd year in a row.
See the best deals of Travelfree for Canaries HERE.

The list of TOP 30 most popular EU destinations is full of Spanish, French and Italian regions. The 2nd spot is secured by the French region Île-de-France (76.8 million nights) whereas the third by another Spanish region Cataluña (75.5 million stays).

Besides the Canaries and Cataluña, among the TOP 10 EU regions Spain has another two destinations: Balears (65.2 million nights) and Andalucía (61.4 million nights).
See the best deals of Travelfree for Spain HERE.

Even though Italy has only one TOP10 destination – Veneto (63.3 million nights), we find another five if we expand the list to TOP30 (Toscana, Lombardia, Emilia-Romagna, Lazio and Provincia autonoma di Bolzano/Bozen).
See the best deals of Travelfree for Italy HERE.

Estonians spend the most of the EU citizens when travelling:

Europeans spend about 85% of the nights when they are travelling inside the European Union borders. And they spend averagely 85 EUR per night when travelling. The lowest spending nation in 2015 was Slovakia with 46 EUR per night, whereas the top spot is taken by the Estonians who spend 129 EUR per night on average.

Turkey and the US remained most popular destinations outside the EU

Considerably less Europeans choose to travel outside the European Union, but the two countries preferred by the EU citizens the most are Turkey (13%) and the United States (13%) with Switzerland in the third place (10%).
See the best deals of Travelfree for the United States HERE and for Turkey HERE.

TOP 30 EU regions by the nights the travellers spent there in 2015: 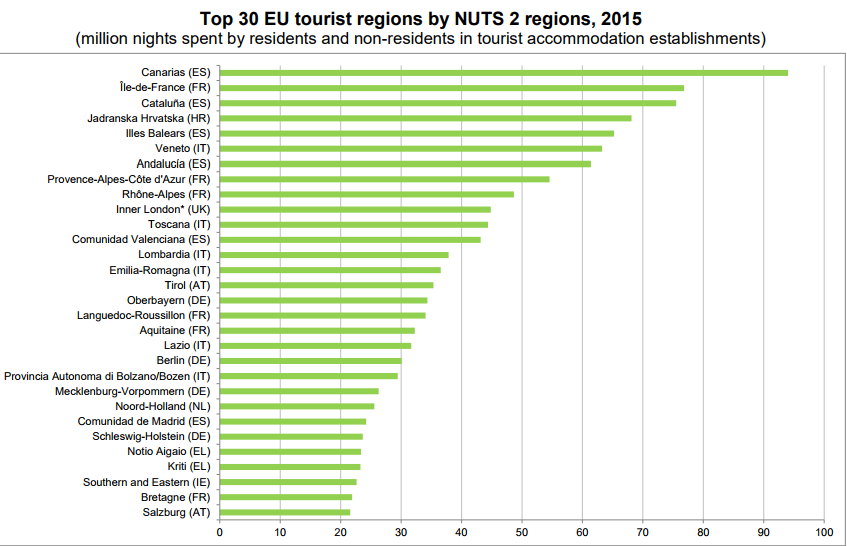 Cheap flights from Sofia to ZADAR (CROATIA) for €14