Posted on 3. June, 2020. 10:30 by Admin
Eurowings flight from Germany to Sardinia was forced to turn around at the last minute because the destination airport was closed due to coronavirus lockdowns. The accident took place late May.

A low-cost German airline tried to resume flights to Italy — but its jet was forced to turn around just outside its destination because the airport was still closed, according to reports. The Airbus A320 operated by Eurowings departed Düsseldorf early Saturday en route on a 730-mile trip to Olbia Costa Smeralda Airport in Sardinia, Italy, but was flying above Corsica when air traffic controllers told pilots of the closure, Italian newspaper Corriere Della Sera reports.  Flight EW9844 was then kept in a 40-minute holding pattern while the pilot attempted to get special permission to land before a diversion to Cagliari about 120 miles away was proposed. But the pilot and crew were ultimately forced to head back to Dusseldorf, landing on the same runway it took from some hour later, New York Post wrote.

A diversion was proposed to Cagliari, some 120 miles away, reports Italian newspaper Corriere Della Sera, but the flight crew opted to cut its losses and head back to Düsseldorf. This little sightseeing tour of western Europe, for the benefit of the A320’s load of two Sardinian passengers, took a total of four hours and ten minutes. The confusion appears to center on Italy’s Ministry of Infrastructure and Transportation reopening the airport on Sunday, May 17, but that decision was overruled the same day at a regional level, according to CNN. 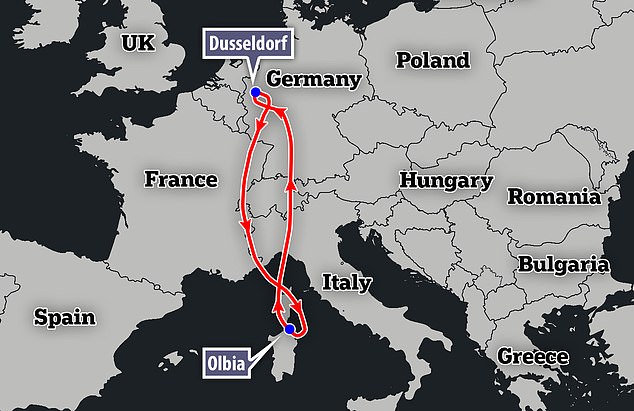 Eurowings spokesman told CNN Travel: ‘Against the background of the corona crisis, the situation at numerous airports in Europe is very dynamic. ‘The large amount of information provided on operating hours or airport closures are often changed at short notice,’ the spokesman added, and there are ‘daily changes in entry regulations in the various countries,’ as reported by Daily Mail.

We have created a Facebook group, where you will get only the hottest travel deals and error fares.
Join now! You are welcome to discuss topics about traveling!

Do not miss next TRAVEL DEAL! SIGN UP HERE and get exclusive travel offers to your email box.

You can find the best car rental prices on Rentalcars.com.

Cheap flights from Vienna to SARDINIA / SICILY from €22